Subject Article: Why I Reject A Young Earth View: A Biblical Defense of an Old Earth.

One of my favorite apologists is Frank Turek. I have really grown to love and respect him, and his methods. He is intelligent, articulate, and charismatic, and it is clear he loves the Lord, and does so with great courage. Frank has written a couple books that I have read and enjoyed, and would highly recommend.

Stealing from God, and Not Enough Faith to be an Atheist.

They are both thought provoking and amazing, and the concepts are very helpful.

Frank also runs www.crossexamined.org, a terrific apologist site. It seems as though everyone involved with this ministry is quite brilliant, and quite talented, and it is with trepidation that I butt heads with them on any issue, simply because I am quite outmatched, both intellectually, and regarding resources.

That being said, I have watched Frank’s responses to the young earth creation theory  very closely during his question and answer sessions, and have just recently read  Jonathan McLatchie’s article again from 2011, Why I Reject A Young Earth View: A Biblical Defense of an Old Earth.  Based on these, I continue to find myself at odds with their conclusions. I do however agree that though this issue should continue to be examined and explored, it should not cause division among Christians.

I say this humbly, and from experience, because due to my passion for the subject, I have certainly allowed what I believe is the truth of God’s word to cause rifts, heated debate, and even anger between me and other christians. The intentions of my interactions are always out of love, and out of a desire to illustrate the amazing truths we can find in the word, thereby teaching how trustworthy the word of God is. How we are completely justified in our faith as Christians. But of course, the very human, and very fleshy part of me will often surface, and cause me to have less grace than I should, usually to the detriment of the conversation, and I am afraid, also to the detriment of people’s general view of me as a person and a christian. This is something I continue to try and work on in my own life.

I also acknowledge McLatchie’s conclusion in the subject article that the bible does indeed allow for a more literal interpretation for the Genesis days, though he does go on to say it doesn’t demand it. I have addressed this issue several times and in several ways. For more of what I have written, please click here:

Yet, in another answer session, he will go on to stipulate that he believes based on the laws of physics and the Big Bang’s apparent reality (I disagree, but again, am not a scientist), the universe is/could-be very old.

If we examine the article in question, McLatchie further complicates matters by stating the myth that it could have been a local flood in Noah’s day, which is not only refuted by a simple reading of the biblical text, but also a simple surveying of the millions of drown fossils buried all over the earth among other obvious geological evidences. Genesis 7 assures us “all the high hills that were under the whole heaven were covered. Fifteen cubits upward did the waters prevail; and the mountains were covered.” Being fans of science, I would challenge any apologist

to explain how water rose 15 feet above all the highest hills, and somehow remained “local”. 2 Peter 3:5-6 continues to support the global event; “But they deliberately forget that long ago by God’s word the heavens came into being and the earth was formed out of water and by water. By these waters also the world of that time was deluged and destroyed.” We can see from the many examples of great sea fossils buried upon the dry land of every continent that this was so. Andrew Snelling has done great work examining this. 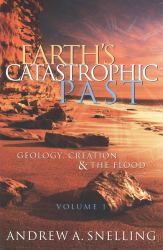 In regards to the days of Genesis 1, these have been addressed by YEC time and time again. But I would at least quickly point out that the day itself is literally defined in the verse as “there was evening, and there was morning, the first day.” Since it is the first one, God goes ahead and describes it for us, a daylight portion and a nighttime portion seem to make up a day. Literally defined. I would also ask, how many “first days” are there?

We are (or should be) familiar with day-age and gap theory, but specifically the gap theory seems to be the one Frank refers to in his answers, though he does so quite tactfully (and I don’t want to presume to speak for him), as he mentions the space potentially between verse one and two of Genesis. For reference, Thomas Chalmers invented the Gap Theory in 1814, saying that great time could exist in the beginning verses. He was a Scottish minister, professor of theology, political economist, and a leader of the Church of Scotland and of the Free Church of Scotland. He has been called “Scotland’s greatest nineteenth-century churchman”. Unfortunately, he was also reacting to the pressure of man’s idea of uniformitarian theory, and the “great chain of being” theory, which are the precursors of evolutionary thinking.

McLatchie says in his  article, that “… as a scientist, the arguments for an ancient earth seem to be very compelling (needless to say, when it comes to Darwinian evolution, it is a very different story).” So it would appear that both he and Frank are convinced the earth is quite old, yet are also both convinced that Darwin’s theory of evolution is “on its heels right now,” as Mr. Turek had stated. This would mean, unless I am misunderstanding, that both of these  men believe that it is possible, if not probable, that the universe is 13.7 billion years old, that the earth is potentially 4 billion years old, and that mankind was created less than 100,000  years ago (Frank’s date) in his present form.

This would mean that man, whom God made in His image, to subdue the earth, and rule it, has lived here 0.00073% of the time the universe has existed, and during only .0022% of the earth’s history. This would also mean that Jesus lied when He said God made them male and female in the beginning, being off by 99.9988%. So for reasons unknown, time would have been invented unnecessarily, for no one, to run on for ages upon ages without anyone but God to observe it’s passing, which would beg the question, why invent it?

It would further require a theory, since Darwinian molecules-to-man is not stipulated by either apologist, about when the rest of the animals were created. If it was long before man to account for an ancient fossil record, then we are now moving away from a Gap Theory, and trying to mold it in to a day-age theory, where each day is theoretically millions or billions of years. This throws day six into great confusion.

Confusion also arises when  the article addresses the “planting of the garden” taking longer than a day. If someone stipulates that God created light, and stars, and the sun from nothing, and then tries to convince me that planting a garden would take this person great time, it doesn’t sit right with me logically. In fact, Frank himself states; “The greatest miracle in the Bible is recorded in the first verse: “In the beginning God created the heavens and the earth. If that miracle is true, then every miracle in the Bible is at least possible.” I would emphatically agree.

Another factor addressed by McLatchie is the death before sin problem. He states that the first few verses do not definitively say there was no death prior. However, our bible does say: “The wages of sin is death” – Rom 6:23

Rom 5: 12 ‘Therefore, just as through one man sin entered the world, and death through sin, and thus death spread to all men, because all sinned…
14 Nevertheless death reigned from Adam to Moses…
17 For if by the one man’s offense death reigned through the one…”

If one were to make the case that animals can’t sin, and therefore their deaths for millions of years are irrelevant, you still have to deal with the thorns, cancers, tumors, and various curse-caused issues of the fossil record, a written punishment of Genesis following the fall.

McLatchie tries to use some assumptions about carnivores causing animal deaths here, and goes so far as to mention the lion’s obvious “violence” – the very animal the bible uses to prove that when the curse is lifted, shall be so gentle, a child can lead them:

Isaiah 11:6 – “The wolf also shall dwell with the lamb, and the leopard shall lie down with the kid; and the calf and the young lion and the fatling together; and a little child shall lead them.”

Since undoing the curse that took place is the theme and scope of the bible entire -Revelations 22:3, And there shall be no more curse –  I feel it is safe to assume the lion could easily be imagined as non-violent in the garden of Eden, since we have a promise it will be so again in the future.

So much internal evidence is thrown askew when the bible is forced to fit man’s theories (e.g. the theory of molecules to man evolution, or cosmic evolution). I would point out that in doing so, we are, like our christian brother Mr. Chalmers did, bending to the will of those who campaign furiously against God, and the redeeming power of Jesus Christ.

In the words of Luther, and despite my shortcomings, “I can do no other.” I will have to continue to support YEC, as I feel it is backed by scripture, and is quite readily corroborated by observable science. But I will also agree wholeheartedly with Mr. Turek that the Lord will not be caring about what we believe the age of the earth is when we arrive to meet him in heaven, but will instead be examining our hearts regarding Jesus instead. It is paramount. My fear though, is that with the bible’s foundation thrown into a confusing obscurity, will it damage the faith of others? I fear it already has.

All this aside, I agree with Mr. Frank Turek and his team of apologists on nearly everything else, and will continue to look to them as a wonderful resource for me, my family, and my church, and recommend them to anyone who finds this article. Since I am so small, and he is out there crushing it, it is unlikely that he or Mr. McLatchie will ever come across this small little blog page. But if that ever happens, I look forward to getting absolutely toasted by a scientist and a doctor. But in closing I will say that it is a blessing to have the education, and the printed bible in my language at all, that would even allow Mr. Turek and I to form opposite opinions on some theology points. There was a time when the word was kept from being studied by all but the clergy,  and someone like me would not have had the privilege to ever read it in my own language, much less the freedom to disagree with my superiors. For this I am grateful. As Tyndale said, “…if God spare my life, I will make a boy that driveth the plough know more of the Scripture than thou dost.” With that purpose having been achieved, we all now have the blessing of studying these mysteries for ourselves, and determining our own salvation… as well we should… with fear and trembling.