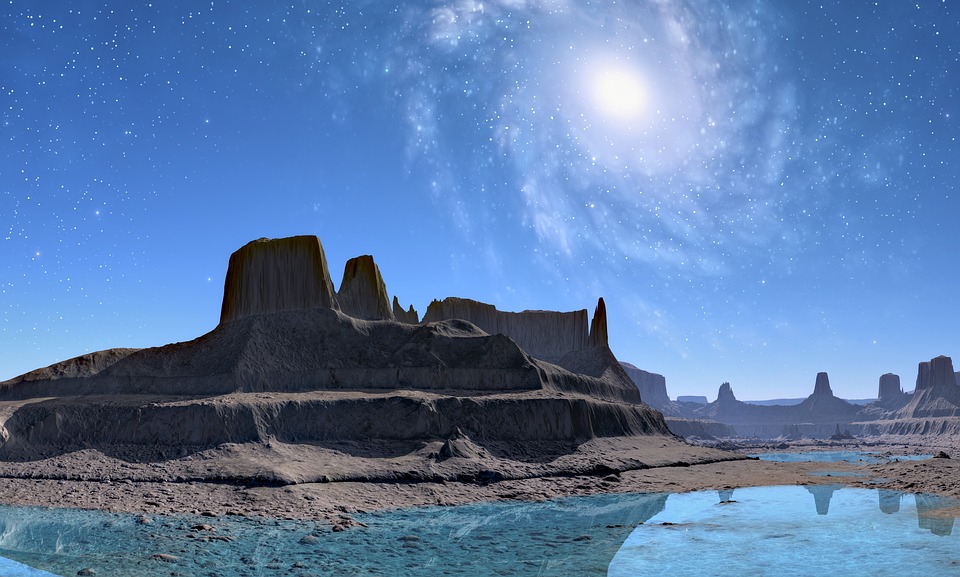 Atheist: Here’s a very incomplete list of things that cannot be explained by your flood or fit into the young earth creationist’s timeline (continued):

plate tectonics, the higher elevation and older age of the continents compared to ocean floors,

Plate tectonics is not a criticism of creationism. Both models agree we see observable plate tectonics. However, based on what we observe today, there are many features that can be explained by a global flood. Many canyons and hundreds of volcanoes lining the ocean floor; layered strata, most fossils, the ice age, the Grand Canyon, and yes the tectonic plates, which were created when the great fountains of the deep burst forth. Imagine water exploding violently from great cracks in the crust such as the Atlantic Ridge, forcing water and mud to race around the globe. Great plates of land began to buckle, forming the mountains of today (complete with buried lifeforms on top of them), This is why the major mountain chains are parallel to the ridges from which they slid.

In regards to the assertion that the age of continents are greater than the age of the ocean floor, my response would be, who dated them? This is circular reasoning. One cannot tell me the earth is very very old, and then use the date they tell me it is to prove it is old. This conclusion is based solely on the faith in this evolutionary model. Aside from its obvious assumptions, this is like declaring that the mountains are old because they are old.

the sheer number of animal species that exist,

Doctors and scientists from both AIG and Creation MInistries International have done exceptional work in this area. Taxonomy and speciation have massive hurdles to overcome if evolution is true, as well as does the fossil record. The animals found are stubbornly found complete and distinct, perfectly designed, and in most cases easily classifiable. This would not be the case if evolution is true, and again obvious to a second grader, if slow gradual change was the rule, then it would not be necessary for all evolutionists to scramble at every presumption of a found transitional form, for there would obviously be millions and millions, so many that taxonomy itself would be impossible. The great variety of species is a boon to special creation, because we do not have to assert that humans, bananas, the porcupine, mold, and octopuses are all somehow related!

Further study will allow you to conclude that not only was their room on the ark for all land animals, but that God has provided great variety within His beautiful design. Species in each case can be traced back to either the genus or family level of classification, now known as the baramin, and each baramin can account for the many species and sub-species that micro-evolution has caused over time. But in each case, and this is key, we always find that biological constraints keep one kind from changing beyond a pre-designed, natural, genetic limit.

Not overly familiar (I am not a geologist), though there is a great creation evidence in bent rock layers, evidence that great amounts of earth were buckled and uplifted during a time where all the rock was soft and pliable (no evidence of cracking). This wouldn’t have happened it hard, brittle rock was slowly uplifted for millions of years. Regarding the uncomformities, I’d direct anyone who wishes to delve into it specifically to Creationist Taz Walker’s explanation of the most famous site for angular uncomformity east of Edinburgh, Scotland.

Touting dolomitization as evidence for evolution, we find evolutionists claiming “evolution” as a pervasive force through all sciences. This is done as if natural occurrences are for some reason denied by Christians in a continued attempt to label them “anti-science”. I have hotly debated atheists who are very precise in their definitions, and who attack when attempts to offer different syntax through context are used. It is a great inroad to an ad hominem attack in many cases. That being said, the consensus among the science-minded elite within the debates have asserted emphatically that evolution is defined as any change in the frequency of alleles within a gene pool. This is from experience, and again, this was emphatically, sometimes rudely asserted. As you can tell from the definition, it applies to organic material. Yet somehow, we keep running across inorganic evolutionary assertions, like in geology here, or in regards to chemical or stellar evolution, where one must deduce that somehow inorganic material is somehow also mutating to provide the universe with different or more abundant types of matter. (We find this as an insurmountable hurdle in the Big Bang Theory model, as matter not only has to explode from the central explosion, but must also keep creating new material along the way).

The reality regarding dolomite is that minerals do change over time. This is hardly anything new, though claiming it is analogous or even a type of evolution, and that biological and geological evolution have occurred together to bring about the existence of man was not something Darwin agreed with, but has become part of the great evolutionary thinking that has been forced to cover many sciences, since without God it must explain everything. That is of course what materialism is. Robert Hazen the geologist wanted dolomitization to be defined as ‘mineral evolution by mutation’ (Hazen, R.M. et al., Mineral evolution, American Mineralogist 93(11–12):1693–1720, 2008).  The bottom line, the chemical changes of minerals over time is well understood, is observable, and does not exclude a creationist account.

massive deposits of salts via evaporation of ancient lakes and oceans,

Remember, the claim is that this is a list of things that CANNOT BE EXPLAINED by a flood or in a young earth timeline. In this case, this is predicated upon evaporation being the definitive cause of these large salt beds, a theory presented by Ochsenius in 1877. Here are a few problems with the evaporation theory, however:

This model is wholly inadequate to explain the thickness of these formations. The obvious response to evolutionists is, ‘based on your assumption that the evaporation theory is how these formations formed, we may have a time problem. However, is that how it was formed?’ James Hutton, who introduced deep-time as a geologist, was convinced that these formations had a hot magma, or igneous origin. This model has been studied since and explains the formations much more adequately. So yes evolutionists can debunk biblical chronology only if they cling to assumed theories they know demand great time. This is often the default assumption in science, since they already “know” that evolution is true. It isn’t a surprise that if you devise a theory based on great amounts of time, you can then use that same theory to prove great amounts of time.

These are simply deposits that accompany tectonic activity, which were of course abundant and global during the flood. Not sure which geological observances around cracks in the earth’s crust would be proof against the flood, but again, I am not a geologist. I would caution those who study it though, to be mindful, just like in the prior salt formation examples. A theory based on deep time to explain a deposit will no doubt be asserted because “we already know evolution and deep time is true”. So you will get lots of “millions of years ago” and “slowly over time” comments. The fact is most geological features we can observe can happen very quickly. Obviously, based on the observation of deposits laid down all over the world catastrophically should lead most to conclude that there must have been a catastrophe. To be blind to it because you have already philosophically ruled out a global flood is not science. It is faith.

To be continued Part 3