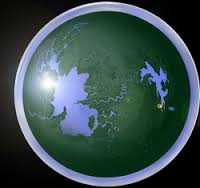 Atheist: Here’s a very incomplete list of things that cannot be explained by your flood or fit into the young earth creationist’s timeline (continued):

These are exampled by the thick chalk beds of Dover, England.

The first thing to note is that these chalk beds, like many other large sedimentary examples, stretch across vast areas, even continents! These great rock formations, and how they cover so much land is a great sign that they were laid down not only catastrophically, but that they were part of a global event strong enough to spread them over large territories. Millions of years of slow local processes would not, and could not accomplish this.

“The Cretaceous chalk beds of southern England are well known because they appear as spectacular white cliffs along the coast. These chalk beds can be traced westward across England and appear again in Northern Ireland. In the opposite direction, these same chalk beds can be traced across France, the Netherlands, Germany, Poland, southern Scandinavia, and other parts of Europe to Turkey, then to Israel and Egypt in the Middle East, and even as far as Kazakhstan.

Remarkably, the same chalk beds with the same fossils and the same distinctive strata above and below them are also found in the Midwest USA, from Nebraska in the north to Texas in the south. They also appear in the Perth Basin of Western Australia.”  – Dr. Andrew Snelling, Geologist, https://answersingenesis.org/geology/rock-layers/transcontinental-rock-layers/

Dr Ariel Roth of the Geoscience Research Institute (Loma Linda, California) and John Woodmorappe are two of several doctors that again provide math that allows for their thickness, once scientists are willing to see past their uniformitarian assumptions. (Article on Chalk beds by Snelling)

Rather than rehash the same response as with syntectonic deposits, and dolomite, it might be interesting to point out here that a major problem with the two opposing views is interpretation of what we observe. We all have the same facts, large chalk formations, sediment in the ocean, the moon and its features, and we must interpret them depending upon our world view. This has been explained several times, and in several different ways, so I won’t re-explain here. But what one must also do is then weigh these theories, these models, these interpretations, and decide for one’s self if they hold water collectively.

When taken as a whole, the obviousness of the order in our universe is apparent, from the solar system to our DNA, evidence of biblical history, evidence of the resurrection, and the numerous factors that can be viewed easily from a biblically historic perspective, where what we observe matches a history written so long ago, and is still proven reliable and verifiable over and over. Or we can believe that humans have no soul, that life, and reason, and art, and music, and love were accidental. And in believing so, we must adopt mental gymnastics, and propose great gobs of time to develop the godless model of our existence.

So the common argument, in order to hope there is no god, is to say, I have a plausible explanation for everything being random if we add enough time, despite obvious signs of catastrophism the world over.

Dr. George Wald, Professor of Biology at Harvard University, and Nobel Laureate espoused well the necessary belief to convince oneself of such incredible explanation:  “The origin of life”  Scientific American, August 1954 “However improbable we regard this event [origin of life], or any of the steps which it involves, given enough time it will almost certainly happen at-least-once. And for life as we know it, with its capacity for growth and reproduction, once may be enough.”

“Time is in fact the hero of the plot. The time with which we have to deal is of the order of two billion years. What we regard as impossible on the basis of human experience is meaningless here. Given so much time, the “impossible” becomes possible, the possible probable, and the probable virtually certain. One has only to wait: time itself performs the miracles.”

offset of sediments along faultlines like the San Andreas,

Don’t know much about this, or why it would mean the world is millions of years old. Would have to research, however the conventional opinion of creation scientists is that most or all of the fault lines were created when the fountains of the deep broke open, allowing subterranean water chambers to flood the earth, and forming plates.

the amount of oil and coal in the earth’s crust,

Answered regarding biomass in part 1.

the mere existence of oil and coal,

Previously addressed numerous times. Here is an excerpt from Diamonds Have Carbon 14:

“Consider this as well: Scientists in a lab made coal in 6 hours. At a different time, in 1982 the British made oil in 10 minutes. Noel McAuliffe of Manchester University triumphantly stated, “We are doing in 10 minutes what it has taken nature 150 million years to do.” This is yes another stellar example of our presuppositions determining our interpretations. Another, more obvious conclusion, if one were not blinded by evolutionary theory would be to instead  triumphantly announce, “It doesn’t take nearly as long as we thought for coal and oil to form!”

So what we have is, depending on conditions and pressure, the scientifically proven ability to form these things quickly. Furthermore, we have evidence that they are from not long ago, with artifacts from mankind having been found in them, such as bells and figurines, as well as having found carbon 14 in them, diamonds, and bones that should at this point be carbon dead.

I would submit that the existence of coal, oil, and the fossil record prove that millions of things were buried quickly andglobally, since this is how they are in fact formed, and do not detract from the reality of a flood, but support it greatly.

the absence of soft tissue in older fossils,

This is an argument from silence. A few years ago, the argument would have been “you don’t have soft tissue in fossils at all!” That of course has changed, since many examples of soft, stretchy tissue have now been found, in T-Rex samples, in triceratops horns, and many others. Now the criticism is, we don’t possess soft tissue from things older than “60 million years”  or “older fossils”. The mineralization of organic material is evidenced all over the earth; millions of animals and plants buried quickly by mud and water. The very nature of how they were buried  provides us with our ample fossil evidence. We know again from observation that most things that aren’t buried do decay quickly, and are consumed by the natural recycling of nature. Any soft tissue of extinct animals would be rare indeed. Soft tissue of such examples only verifies the creation model. A better question for atheists is, why do we have this many fossils at all?!

early fossils found in gastroliths in the bellies of dinosaur fossils,

Interesting assertion here. A gastrolith is a rock swallowed by a dinosaur that is used to aid digestion. As they roll around in the belly of an animal, they become polished and rounded. Evolutionists have found some of these with fossils already in them, so as you can see, if the fossils within the gastroliths were formed before the dinosaurs, then how did the the flood cause both samples to be fossilized at different times? The solution, as verified by Zaleha, M.J. and Wiesemann, S.A., (Hyperconcentrated flows and gastroliths: Sedimentology of diamictites and wackes of the Upper Cloverly Formation, Lower Cretaceous, Wyoming, U. S. A., Journal of Sedimentary Research 75(1):43–54, 2005), is that these gastroliths with fossils are not gastroliths at all, but merely akin to the river rocks of today. Polished, smooth rocks washed miles and miles by water. We can easily imagine in a receding flood, many rocks being eroded and deposited all over the land. Why then are these classified as such? To promote evolution? Perhaps. Or perhaps an evolutionary scientist gets more kudos by reporting on a  supposed “proof” of anti-creation, and a rare gastrolith, then reporting on some river rocks?