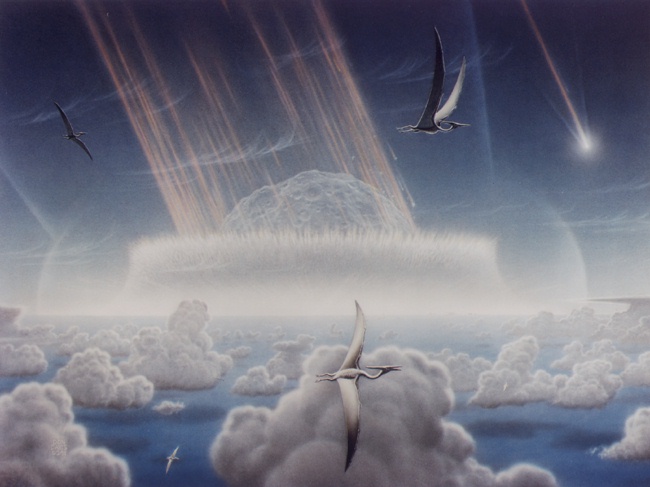 A giant, life ending, asteroid is the common theory, yes? 65,000,000 years ago, teachers confidently espouse, that the most “likely” scenario was an asteroid that our dragon friends could not survive. Despite no evidence for such an event, there are a surprising amount of specifics taught to children about this make-believe impact. It is a model that fits the bill, when one is needed to prop up faith in evolution, and allows evolutionists to maintain their pre-supposition in molecules-to-man, despite the observable data at hand.

The asteroid was apparently 6 miles wide, the needed girth to cause an impact great enough to change the weather, which would have created a crater 110 miles across. There are no craters in the surface of the Earth that show evidence of such an impact, though scientists have tried to pigeon-hole the data from the Caribbean Sea to imply that this event must have happened there. This impact, according to the theory, first proposed by geologist Walter Alvarez in about 1980, wiped out the dinosaurs, along with 80% of the Earth’s animals.

This theory is mostly propped up using the discovery  of a higher content of  of iridium in the Caribbean,  and coupling it with the made-up geologic column which exists no where on Earth. (Iridium is a mineral found in many meteorites, but is also heavily prevalent in volcanic events, which occurred during the flood.)

It is worth noting that though this is a prevailing theory, it is not the only one. Many scientists believe that alternate events killed the dinosaurs. Some of these include mammals eating dinosaur eggs,  the evolution of narcotic plants, climate change,  diseases, loss of plants causing herbivores to starve, which in turn caused the carnivores to starve, lowering of oxygen partial pressure in the atmosphere.

There are excellent articles and evidences addressing reptile size, geologic column, radiometric dating, etc, from a creationist perspective. But the important point here, and the crux of this article, is to note that none of these theories indicate a global flood. None of these indicate a drowning event, or water at all, as a catalyst for bringing about the extinction of large reptiles.

Why is this important? We can safely agree that academia in general has a strong bias against the bible, and its historical narrative, so we certainly wouldn’t expect the default opinion of secularism to match the global flood history recorded in genesis.

But what is telling is the actual observable data.

Certainly we know about finding buried dead things all over the Earth, including large pre-flood dinosaurs, or dragons.

We have discovered billions of dinosaur tracks over the last 20 years, across the globe in over 1500 different locations. Scientists are slowly agreeing that these fossil graveyards, soft bodied (jellyfish) animal fossils, and fossils buried mid-meal, or mid-birth indicate a quick catastrophic burial, rather than some slow burial lasting millions of years.

But even more telling is that we have scientists themselves admitting that these finds were originally deposited due to water. For example:

World’s Largest Dinosaur Graveyard Linked to Mass Death, By Charles Q. Choi, Live Science Contributor – “The way the fossils are linked together in the same layers of earth within these bonebeds suggests all these Centrosaurs were wiped out simultaneously. The likely culprit in this scenario was a catastrophic storm, which could quickly have routinely made the waters flood up as high as 12 to 15 feet.”

Publication in Yellowstone National Park – “Mammoth Site in South Dakota. Mammoths and other megafauna got trapped in a sinkhole and drown about 26,000 years ago.”

This is just a sampling. All over the world, and in article after article, scientists observe the data that these fossils were drowned at the time of death.

Now, look at these pictures of dinosaurs discovered buried:

Notice they exhibit this peculiar contorted position popularly called the “death pose.” This pose of many fossilized dinosaurs, with wide-open mouth, head thrown back and recurved tail, likely resulted from the agonized death throes typical of brain damage from asphyxiation, according to paleontologists. If they were buried in rock slides, or were buried after death and then fossilized, they would not have this position. These animals were obviously suffocating as they were being buried by mud and water. These animals drowned.

We find this data all over the globe, and yet, I would remind you that all of the deep time, secular speculations taught in schools do not involve water! I would say that I remain curious as to why that is. But I know the answer. It puts science a little too close to a biblical theory that must not be allowed in the door. But, as it has many times before, the bible continues to be shown as the most accurate explanation of our early Earth. Is the story fantastic, and amazing? Absolutely. But it so easily explains so many geological features that it puts secular theories to shame. Academia will of course continue to scoff at the bible, regardless of how well the data matches the history. But it is quite faith-building to know that when you put in the time and research, you can stand on a great deal of evidence to support the biblical narrative.

2 Peter 3:3 Above all, you must understand that in the last days scoffers will come, scoffing and following their own evil desires. 4 They will say, “Where is this ‘coming’ he promised? Ever since our ancestors died, everything goes on as it has since the beginning of creation.” 5 But they deliberately forget that long ago by God’s word the heavens came into being and the earth was formed out of water and by water. 6 By these waters also the world of that time was deluged and destroyed.